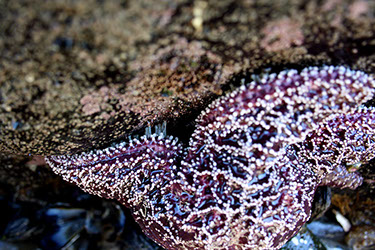 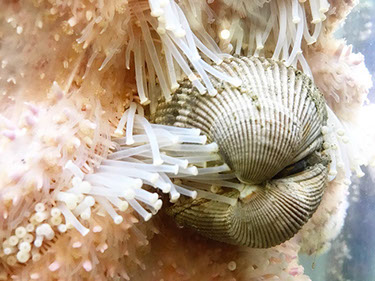 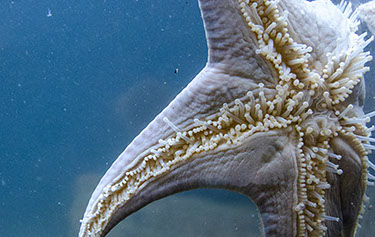 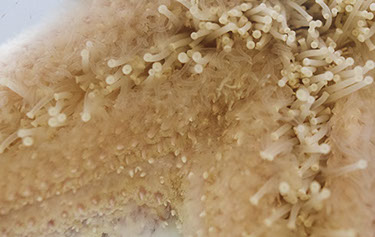 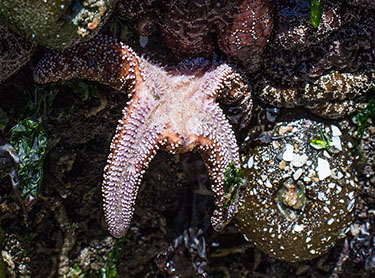 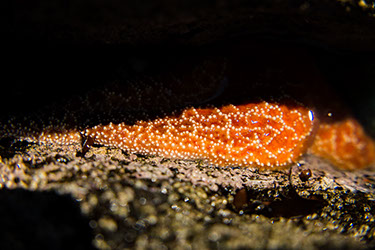 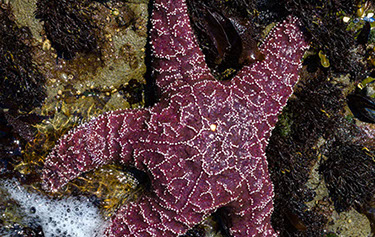 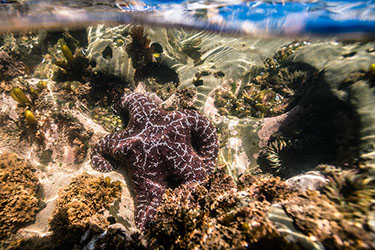 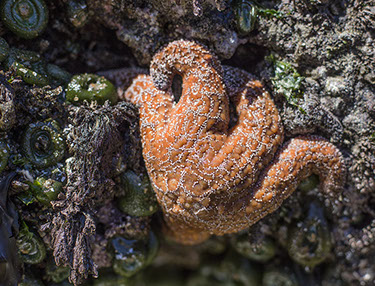 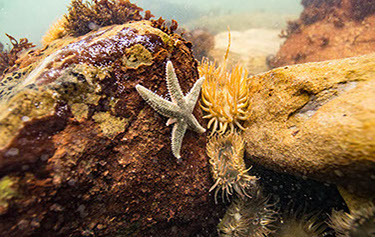 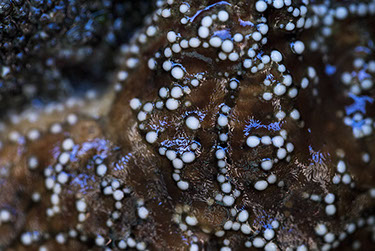 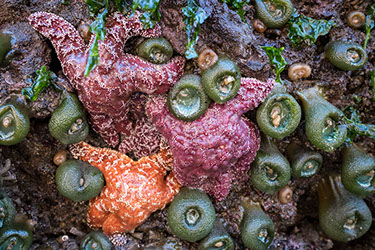 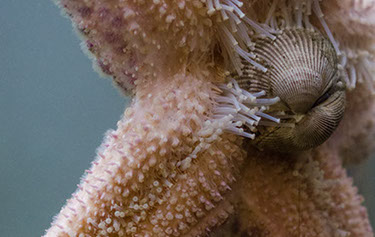 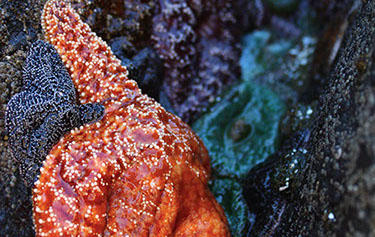 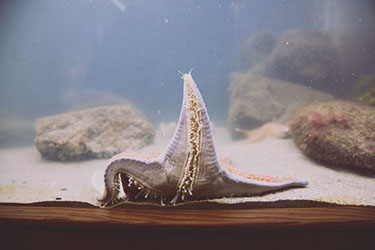 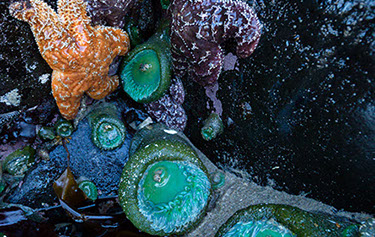 As carbon dioxide gets released into the atmosphere, the planet warms by trapping in the sun’s heat. Most of that heat gets absorbed by the ocean, lucky for us, but unlucky for ocean organisms. A small change in ocean temperature is a large change for those species and larger ecosystems and, because of this, these organisms get easily stressed out by the warmer waters.

The beginning of summer 2013 was met with a phenomenon that left many scientists shocked: sea stars started dying along the West Coast of North America in greater amounts than ever recorded. Initially, the disturbance started in Washington, but by that summer, the phenomenon was recorded as far south as Mexico and as far north as British Columbia. Sea stars’ tissue decayed, leading to death in a manner of days. The decaying occurred faster than the sea star could regenerate its limbs and seemed to spread quickly from one sea star to the next. The symptoms they seemed to be experiencing became known as the sea star wasting syndrome (SSWS).

One sea star species hit hardest was the ochre star or Pisaster sp. This star is considered a keystone species, meaning the species can effectively shape an ecosystem at a greater proportion than their abundance would expect. Therefore, the ochre star population’s decline was detrimental to the environments in which they lived. Less of them meant less predators for mussels, which outcompeted surrounding algae for space. And without a diverse number of algae, less organisms can survive in those ecosystems.

Another major sea star species that experienced massive die-offs was the sunflower star (Pycnopodia helianthoides), one of the largest sea star species and a major predator of sea urchins and other sea stars. According to UC Santa Cruz’s ecology and evolutionary biology department, sunflower stars were one of the first sea stars to be effected by SSWS. Soon after, other species would succumb to the wasting syndrome.

Sea star wasting syndrome began to slow down towards the end of 2014; however, it left disaster in its wake. Three years later, the coastal ecosystems affected are still picking up the pieces.

This summer Mackenzie Moran and Gretchen Rude, two undergraduates from UO’s Oregon Institute of Marine Biology (OIMB) Invertebrate Zoology class, catalogued the percent of ochre stars with SSWS by a Charleston, Oregon boathouse. Mimicking the same descriptive study conducted by OIMB Education Program Assistant & Senior Research Associate Maya Watts when she was a graduate student, they found that 10% of sea stars in that area were wasting. However, this was good news: Watts recorded that 80% of sea stars were wasting in that same location just three years before.

While the sea star population has shown remarkable resilience, there is still the concern that SSWS will return soon with a vengeance. Scientists moved quickly to find out what caused it and why the syndrome was so much stronger than it ever had been. They soon discovered that SSWS is caused by a densovirus (SSaDV), which can be spread very easily, especially when its victims are stressed. With that knowledge, scientists looked back at previous cases of echinoderm mass mortality to see what made the sea stars so stressed.

There have been many recorded instances of echinoderm mass mortality, such as sea urchin “balding;” however, these instances were due to a bacterium, not a virus. The last two instances of a virus-caused echinoderm wasting epidemic was 1983 to 1984 and 1997 to 1998. Both were sea stars wasting and associated with an El Niño ocean warming, according to National Geographic.

The connection between warmer waters and an increase in epidemic size makes sense; warmer waters stress organisms like sea stars, making them more susceptible to syndromes. While there wasn’t an El Niño in 2013 but an influx of warm water along the West Coast, named “The Blob” flowed in around that time. Scientists believe that The Blob formed thanks to an increase of glacial melt, which scrambled the natural ocean currents.

In other words, these disturbances in ecosystems and species connect to the realities of global climate change. If ocean waters continue to warm, epidemics like the Sea Star Wasting Syndrome will be more commonplace.

Oregonians always boast about their beaches. I could never understand why. When I pictured a “coast,” I pictured cloudless blue skies and warm, crystal clear water.  A place where you do not need to wear a wetsuit to keep from freezing. I picture the pristine beaches of southern California. The first time I went to an Oregon beach I was incredibly disappointed. Where was my cliché beach? The weather was 40 degrees and raining. My friends and I jumped in, then ran to the car in order to not freeze. The whole experience could be summed up in two words, cold and underwhelming.

It took me two years to realize how wrong I was. I was lucky enough to join a group of fellow journalists on an expedition to the coast. My job was to observe and write, something I did not do two years ago. My perspective changed completely. The image in my mind of the coast transformed from a cold, uninhabitable place to an animated oasis.

The Oregon coast teems with life. Its tidal pools contain a whole world of organisms that hide in the shallow clear water, trapped there as the waves come and go. These pools are home to the beautiful green sea anemone (Anthopleura xanthogrammica).  These organisms camouflage themselves with small rocks, disappearing at low tide. As soon as the tide rushes back during high tide, the green anemone exposes its bright colored tentacles, almost as if flowering.

The simple action of picking up a large rock in one of these tide pools unleashes a horde of crabs, scurrying away in all directions.  Hermit Crabs (Pagurus hirsutiusculus) cling to the rock or shoot back inside their shells. Larger crabs quickly scuttle to safety under a new rock.

As you venture out further under the water, vast forests of Nereocystis luetkeana sway as they mollify encroaching waves. This kelp forest used to be home to swift moving sea otters preying upon sea urchins. The last wild otter was hunted to extinction in 1907 starting a recession of the bull kelp. One hundred and ten years later, even as this underwater forest diminishes, the rich canopy still host a variety of ocean life. Fish grow and swim amongst the safety of these massive stalks.

But here’s the reality: this could disappear as our oceans begin to warm and acidify.

Tidal pools model the future state of our oceans. Each day, these pools go through cycles of acidification. Just like humans, organisms in the tide pools release carbon dioxide as they breathe. During the day, algae acts as a moderator, turning the carbon dioxide into oxygen and keeping the tide pool balanced. Once the sun falls below the horizon the algae is incapable of balancing the pH. During this time the organisms in the pool keep producing carbon gas, raising the acidity of the water. As these pools become more acidic, shells begin to dissolve and coral begins to bleach. Without the algae to add oxygen to the environment, everyday life cannot be sustained and the organisms that inhabit these shallow pools cannot grow.

Our oceans bear the burden of carbon emissions as our reliance on fossil fuels continues. The pools I disturbed at Cape Arago can recover quicker than our oceans. Scientists are using these small pools as reference for what could happen as our oceans become more acidic.  Some species will adapt. Certain species of crab, lobster and shrimp grow stronger shells to cope with rising acidity. Almost all species will be impacted, and the effects are unknown.

The Pisaster Ochraceus comes in a vibrant range of colors from purple to orange. This five-armed sea star used to cover rocks all along the Oregon coast. Every couple of decades P.Ochraceus goes through a wasting event brought on by disease. This is known as sea star wasting disease and has happened repeatedly since the 1970’s.

2013 brought on a new epidemic. This time the disease ravaged the coast line. Two years later scientists are still looking for answers as to why it was so catastrophic. The culprit has been identified as Sea Star associated densovirus, a form of sea star wasting disease. Sea star wasting disease causes very peculiar symptoms. It causes stars to develop skin lesions, lose limbs and their ability to stick to rocks, and eventually just melt. Some scientists noted that arms would just wander off the body. While this seems like something out of a low budget horror movie, this pathogen is incredibly lethal.

Sea stars prey on Mytilus californianus and Strongylocentrotus purpuratus. Mytilus californianus, the California mussel exist in large numbers all over the Oregon coast, without a predator like the purple seastar they wreak havoc on the environment. Without sea stars, California mussels will crowd out other species in all the tidal regions. Mussels move at a glacial rate, but once they crowd out species in the lower tidal zones, diversity of all the surrounding invertebrates will begin to suffer. Not much is known about what will happen, we are left waiting and watching as these mussels move into the lower tidal area.

On the other hand, the effects of Strongylocentrotus purpuratus are easier to see. Sea urchins primarily feed on kelp beds and consume so much kelp they create an urchin barren, an area devoid of the beautiful swaying bull kelp. With no sea stars around to feed on them, these urchins will eat gluttonously.

Oregon is waiting to see this impact, but an area in the Puget Sound of Washington is a good marker for things to come. In the sound, the sunflower sea star (Pycnopodia helianthoides), a starfish with up to 20 arms was also nearly wiped out by sea star wasting disease. The sunflower sea star preys on the purple sea urchin. Once the sunflower sea star was removed from the tidal pools, urchin populations grew, and the urchin barren was created. The pictures of urchin barrens are heart breaking. These areas become void of life as the hordes of urchins march along, killing smaller invertebrates and algae as they go.

The connection between urchin barrens and sea star wasting is obvious. Sea stars are known as keystone predators. They prey upon species like urchins or mussels that can have a negative impact on the ecosystem if their populations grow too much. Sea star populations are recovering. Dr. Bruce Menge, a professor and researcher at Oregon State University,  explained no one knows definitively what really caused sea star wasting disease to be so devastating, or what the future held for our tide pools. Menge reports that temperature did not play a role in sea star wasting along the Oregon Coast, while a team in Puget Sound found the exact opposite for northern Washington. The epidemic generated a lot more questions than answers. Menge believes a whole host of variables led to the outbreak and the effects.

With our oceans warming and becoming more acidic, sea stars and other marine species could become more stressed and therefore more endangered. 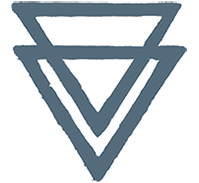