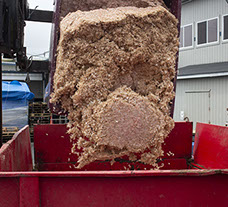 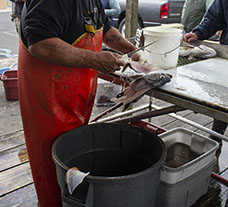 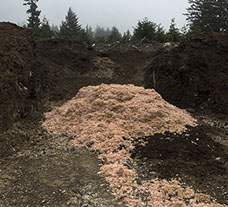 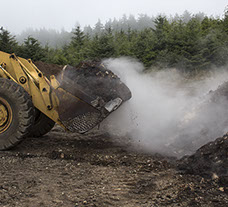 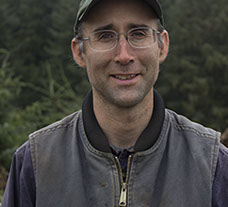 A worker from Bandon Pacific Inc. in the Charleston Marina dumps bins of shucked shrimp shells from the day’s catch into the Seacoast Compost trailer. As the loads dropped into the bed, steam rose and filled the air with a powerful and stinky aroma. “It’s already breaking down. That’s ammonia right there,” Boyer said.

A worker at Betty Kay Charter in the Charleston Marina flays fish, while customers observe from the side. He slides the remaining carcasses into a large bucket for Boyer to take back to his facility up the road.

Boyer unloads the collected shrimp shells next to his feedstock piles just minutes after picking the load up from Bandon Pacific Incorporated. Ammonia, a gaseous nutrient from the shrimp shells, is continually escaping into the atmosphere, so he moves quickly to add the resource into the compost piles.

Boyer climbs into his bulldozer to turn one of the piles in order to even the temperature dispersal and disperse the various processes. As the interior is uncovered, a large amount of steam is released from the heat of the pile. “We typically turn the piles 5 times before we let them sit and actively compost,” he said.

David Boyer and his wife, Athena, moved to Charleston about four years ago. Running a local landscaping company, Boyer was quickly able to connect with the community and progress towards his vision of starting a composting company that utilized local products, including waste from the large-scale seafood industry. Two years ago, Seacoast Compost began and continues to grow today.

A hint of manure fills the air around the Seacoast Compost property two miles uphill from the fishing docks of Charleston, Oregon. The aroma is surprisingly mild considering the massive piles of active compost sprawled throughout the acreage.

“You’ll smell it when we pick up the shrimp,” said David Boyer, the owner, while grinning.

Boyer and his wife, Athena, started Seacoast Compost four years ago. Working on various organic farms in California for several years, Boyer developed an interest in composting strategies and their relationship with plant health. His technique is unique.

He uses cow manure, red alder wood, and seafood waste such as crab, shrimp, clamshells, oyster shells, and fish carcasses. The high nitrogen content of seafood waste is unusually nutritious. Microorganisms within the compost feed on the remains and, over the course of several months, convert it into rich humus.

Seafood waste is occasionally used in composting practices elsewhere; however, most don’t actually compost the remains. “They use shrimp meal and crab meal that is dried at another facility. Before they sell their product, they just add it in,” Boyer said. “I actually don’t know of another facility that composts seafood waste with wood product and cow manure all together. It’s a much more homogenous and unified product.”

Boyer often describes the composting processes as self-management. However, using methods he learned from biodynamic farming earlier in life, he takes further steps to connect with the compost. In addition to the soil chemistry that can be understood through science, Boyer recognizes the life within the soil and takes into account factors outside of Earth’s atmosphere, such as considering the lunar calendar and the positioning of the moon and stars.

“We place homeopathic preparations into the piles that help draw these forces in to help liven the soil and allow the plants to become more sensitive to their environment,” Boyer explained. “In biodynamic practices, we can help plants become more of what they can become, as opposed to less and less and less.”

Many experts remain skeptical of the effectiveness of this approach to agricultural practices because of its lack of scientific evidence. Nevertheless, biodynamic farming is a growing practice in various agricultural spheres. And whether these practices reach their intended effects or not, the close relationship that Boyer has to his product through biodynamic practices is significant in and of itself.

Close accessibility to seafood companies and organic farms has made Charleston an ideal location to start Seafood Compost. Having developed relationships with various fishing companies within the Charleston Marina, Boyer makes frequent trips to the docks to collect the waste from the operations.

“They have to get rid of it one way or another and they’re happy that I come and pick it up and get rid of it for them for no charge,” Boyer said of the seafood companies. “It costs a lot to ship it out into the ocean and dump it. And that’s typically what they had done.”

The community quickly realized the value of Boyer’s operation in reducing large quantities of waste and providing an effective composting product. Rural Development Initiative and The Neighborworks Umpqua, two local non-profit organizations, created a grant to help facilitate some aspect of the seafood industry. The groups recognized the significance of Seacoast Compost’s operation and awarded them one of the three grants available to help jumpstart their company.

“We used that as down payment on the screener, which was the piece that allowed us to sell in bulk,” Boyer said, pointing at the massive, yellow machinery that sifts out the material that has not broken down through the composting process.

Still in the early stages of the business, Seacoast Compost sells its product locally and in bulk. However, Boyer hopes soon to bag the product, the main step to expanding their compost sales further throughout Oregon and into California and Washington. “There’s a lot of demand for good compost in places like Arizona and New Mexico also, where they don’t have raw materials like this,” Boyer said. “But we’re taking it one step at a time.”

Although they are looking to grow their business, Seacoast Compost will maintain its local connections and continue its positive impact in the community.

“You foster these kind of relationships in the community and let them grow,” said a worker from Bandon Pacific, one of the several fishing companies that works with Boyer. “It’s great to be able to contain everything that you harvest from the ocean and not waste a pound. We have enough waste.”