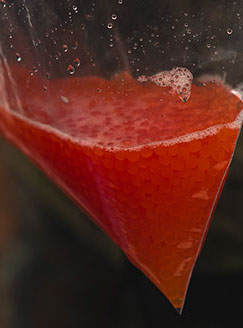 Members of the Florence STEP (Salmon Trout Enhancement Program) volunteer at Whittaker Creek off of the Siuslaw River alongside members of Oregon Dept. of Fish and Wildlife with a Steelhead fish count.

Tom Dixon (left) and Larry Jensen (right) share a laugh after Dixon put his fishing waders on the incorrect way.

From inside of the fish trap, the Steelhead are examined to check the gender of the species and to see if they have already been counted in earlier counts.

Terry Barret (left) holds on firmly to a female Steelhead while Kent Horner (right) uses oxygen to expedite the Roe colelciton process. The Roe is collected into Ziploc bags like the one that Liz Laver is holding.

During the process of Roe collection, there is often spillage onto the forest floor that is why the volunteers try to be as efficient and accurate as they can be.

From just outside of the fish trap, Bill Hennig carefully watches to ensure that all Steelhead are marked properly.

Florence STEP member Brit Bolerjack (left) shows Beth Tanner (right) the method to releasing the fish back into the stream after collection.

Larry Jensen repairs one of the three nets that Florence STEP uses to catch Steelhead in the Whittaker Creek fish trap.

A Leech slurps up some of the Steelhead blood that remains on Liz Laver’s glove after collecting Roe.

ODFW Fish Biologist Christine Clapp keeps count of the Steelhead Roe as she places another bag in the cooler. The eggs are sensitive to light and must be stored in the dark.

Christine Clapp (right) explains to Beth Tanver (left) the differences in the organs inside of the female Steelhead. ODFW employees lead outreach programs to educate children on how complex these species are.

Beth Tanver (left) listens as Christine Clapp (right) shows the different sections of the female Steelhead’s heart during the dissection.

Beth Tanner of ODFW removes the left eye of this Female Steelhead during a training excercise. ODFW uses these dissections to teach schoolchildren about the importance of Salmon and Trout habitats.