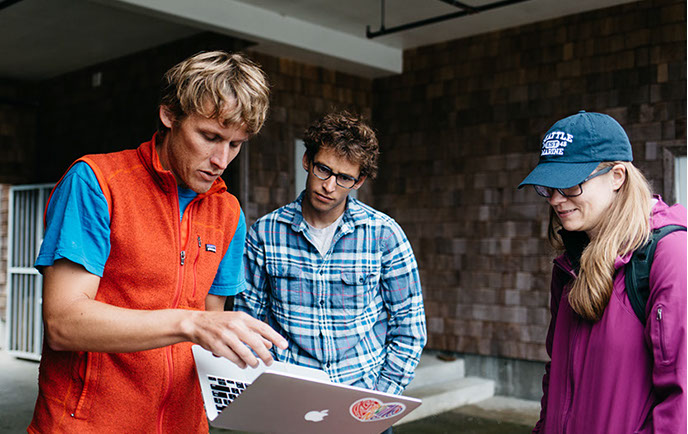 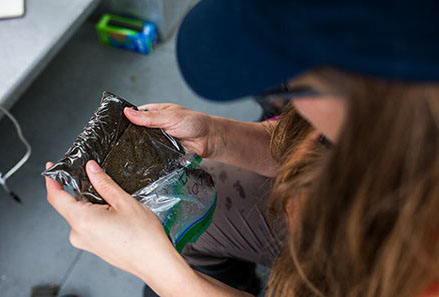 David Sutherland (above, left) studies ocean physics. He’s an oceanographer. He takes his graduate students out to the Coos Estuary to help them research and study the area. On an Oregon Institute of Marine Biology boat, the crew of three set out for a day of collecting sediment samples, as well as data about salinity, turbidity, temperature and other water properties. 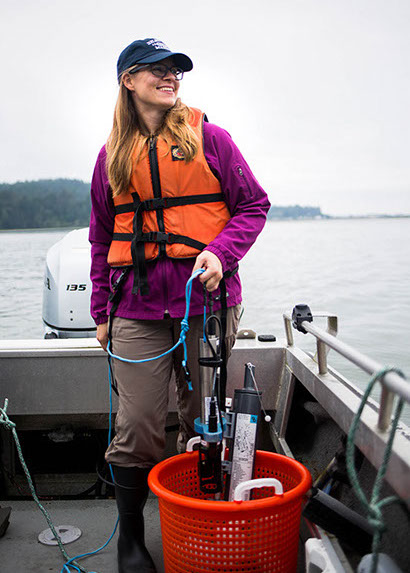 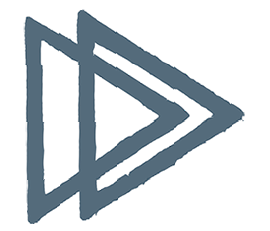 Postdoctoral student, Emily Eidam, holds the Conductivity, Temperature, Depth instrument. For her research, she’s taking sediment samples from around the estuary to understand the varied sediment from soft and muddy, to rough and sandy. Originally from Alaska, she is Sutherland’s newest graduate student. 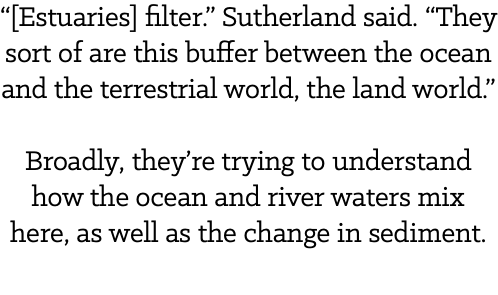 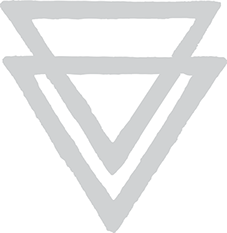 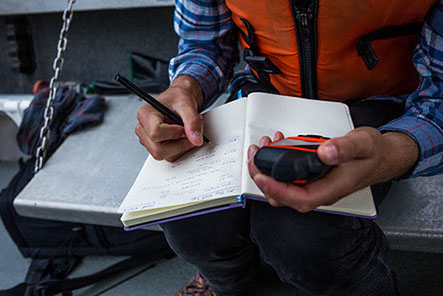 Masters student, Ted Conroy, writes down geographic points of where the boat is for each sampling. Conroy grew up surfing along the California coastline and was drawn to this type of study. He wanted to further understand oceans and their movement. He and Sutherland are putting together a model of the estuary that helps run simulations to better understand the dynamics of movement in the estuary. It’s similar to a weather model, and these different data points help make it more accurate. 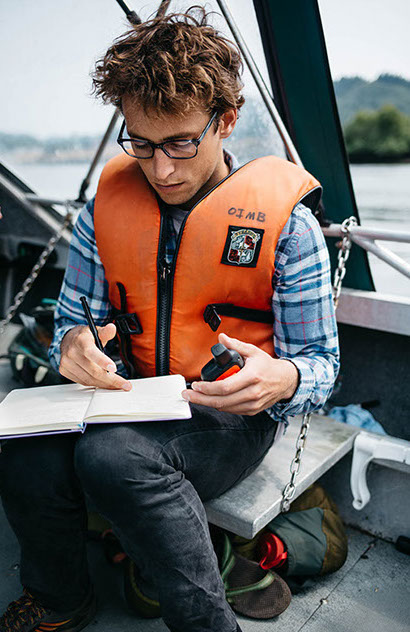 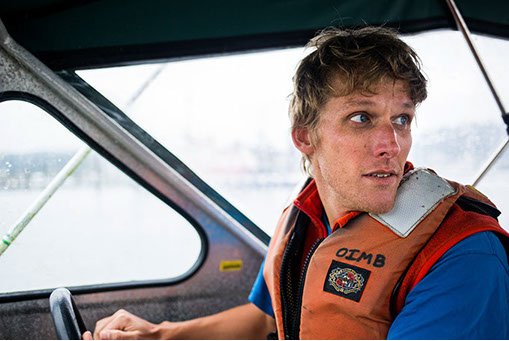 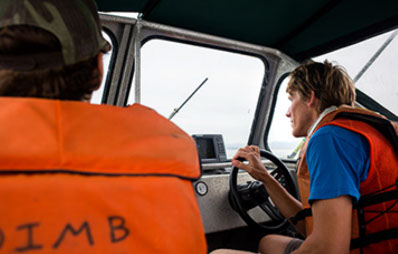 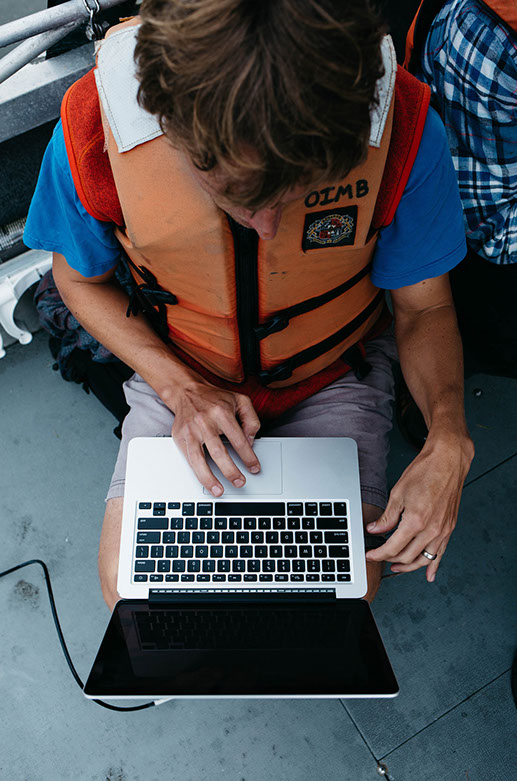 As soon as the team got on the water, the boat’s gas tank started to hover between the last line and empty. Sutherland was relaxed about it, continuing on for several hours in the hazy morning without running out of gas. He brought along Swedish fish and sparkling water for the team. They gathered samples as the boat floated in the dynamic waters, before pulling back into OIMB. 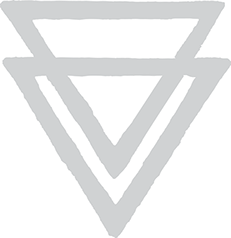 On the second floor of the U.S. Forest Service’s Pacific Northwest station is Rebecca Flitcroft’s office. In a corner room with windows, torn coloring book pages in bright colors from her children contrast old volumes of Fisheries Magazine and topographic maps. Flitcroft leads a team of scientists that studies watersheds and Northwest salmonid populations.

The public is not the only community in which the gravitas of estuaries is often overlooked. In the scientific community wetlands are not always front of line in research projects.

“It partially stems from our academic silos of freshwater specialties and marine specialties,” Flitcroft said.

Part of the Forest Service’s work has been to increase understandings of whole systems, which includes these estuaries. And for Flitcroft, this is important because of the biological impact estuaries can have on salmon populations. According to Flitcroft, salmon that spend time in estuaries diversify the life histories of the species and account for 30 percent of the total population that return to spawn up river.

“That portion of the population may be critical into the future as we see changes in the climate,” Flitcroft said.

And in addition to salmon, important organisms like Dungeness crab need estuaries to rear. Marine fishes also need estuaries to hide out from their predators in the ocean.The threat of climate change does not exclude estuaries. These areas, especially along the coast of the Pacific Northwest, face increased saltwater intrusion.

The river mouths of the Pacific are primarily flooded due to gradual sea level rise which means as the sea levels rise more rapidly, saltier water moves inland faster. According to Flitcroft, the Northwest is particularly vulnerable to intruding saltwater because of the area’s geology. Since the Cascade Range stands so close to the coastline, estuaries and wetlands cannot move any further inland. Fewer plants are able to survive in these areas of increased salinity, which means the diversity of estuaries could change as sea levels rise.

Estuaries and other wetlands are easy to drain. They make good places to graze cattle and develop different areas for homes and businesses. But the damage that’s done to an estuary can be hard to recover. Flitcroft said that subsidence, or sinking land, starts almost automatically after an area has been drained.

She cited the Salmon River, which restored its salt marshes over 40 years ago. Today, the habitat has still not fully recovered, and according to Flitcroft, will not be recovered soon. The process takes time, as geology moves often in centuries and millennia rather than decades and years.

Flitcroft seeks to engage the public and educate community members on the importance of coastal estuaries within an entire system. Understanding the value of a whole system that is intact helps demonstrate a relationship between commercial and lifestyle outcomes. From successful fish catches to the beauty and spiritual well-being gained from a wetland, Flitcroft says that the benefits are wide for the public.

“As we think about our obligation to the American public to maintain and restore endangered species,” Flitcroft said. “Our ability to think broadly and across boundaries is an important part.” 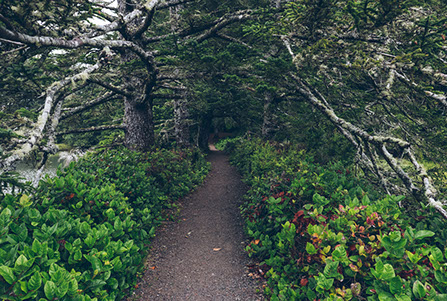 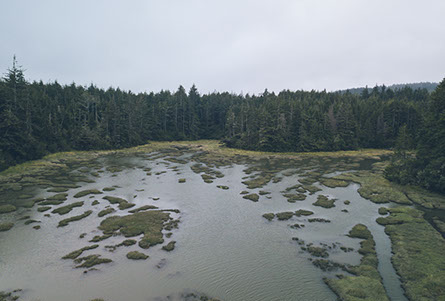 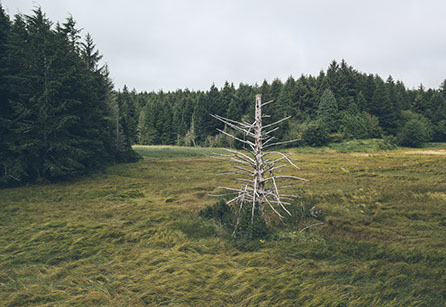 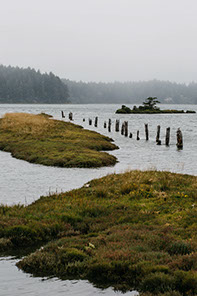