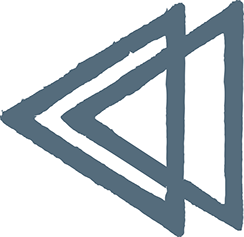 Past miles of braided river, large channels of rapids, The Million Dollar Bridge and a huge flood plain with floating chunks of glacial ice is a place called Baird Canyon. The first of two field camps run by the Native Village of Eyak, Baird Canyon is the first of two mark and recapture sites for tagging Chinook salmon in the Copper River with the goal of estimating the escapement population count of the giant fish that can weigh upwards of 100 pounds.

Fishwheels are used to catch the fish that are then measured, fitted with a yellow RFID (radio frequency identification) external spaghetti tag, an operculum punch, and released back into the river. As the fish continue migrating up the Copper River they mix with the untagged Chinook that were not caught by the fishwheels. By the time the fish reach the recapture site at Canyon Creek the fish have completely mixed together and the ratio of tagged to untagged fish caught in the Canyon Creek fishwheels are used to estimate a number for the escapement population, the portion of fish that escape commercial and recreational fishing and make the return journey to their freshwater spawning grounds.

The Alaskan Department of Fish and Game uses the numbers acquired by the Native Village of Eyak to help manage the personal use fishery. Commercial fisheries use the escapement estimate as a post-season management tool. Since 2002 there have been three years when the escapement goal for Chinook hasn’t been met.

Matt Piche, Natural Resources Manager at the Native Village of Eyak and Camp Director at Baird Canyon says “The goal of everyone in Alaska is to keep these fish running strong.” 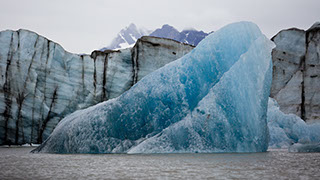 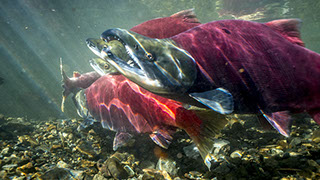 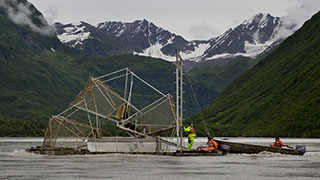 Herring were one of many species greatly affected by the Exxon Valdez oil spill in 1989, and now one of the only ones that have not yet recovered. The cause still remains a mystery.

One of many videos from the Cordova, Alaska climate change journalism project with the University of Oregon and Prince William Sound Science Center. This highlights fish populations in Prince William Sound and how central fish–even herring–are to the livelihood and culture of this small Alaskan town.

Between May 1 and September 15, Bruce Stamper doesn’t get much sleep. He works primarily as a spotter pilot for commercial fishing operations in the Prince William Sound. He flies his two-person Super Cub float plane over the sound, gathering indispensable information on salmon runs to relay back to the boats he works with.

During fishing season in Cordova, Stamper also works his own gillnetting boat in order to collect salmon for his family. In addition to that, he custom packs fish to sell to restaurants, Internet salmon retailers, and fresh food markets.

I sat down with Captain Anthony “Tony” Naples, after experiencing a three-day tendering trip for a salmon opener with him the week before. First, I’d like to point out my embarrassment: on the second day of the trip, I was the guy “talking with dinosaurs” numerous times and it wasn’t fun. Sorry, Captain Tony.

Tendering isn’t what you call in the mix of fishing but more like being a convenience store on the sea. On my trip, fishermen were only allowed to fish for a 36-hour time frame; from 8am to 8pm they could fish throughout the day and night if they pleased. In order to do so, ships such as the Captain Tony’s Liahona stay in the same area as the fishing boats making sure fishermen have the right accommodations. Tender boats provide anything from gas, food, or ice but most importantly, they provide the ability to transfer fish from the fisherman’s boat into their tender boat fish hold.

The Liahona has the capacity of holding up to 150,000 pounds of fish, making it a huge advantage amongst the other tender boats. Last year, the Liahona had its fair share of the record-breaking season of salmon fishing as a maximum capacity seining boat. In theory, Captain Tony decided it would be best for the Liahona to be a tender boat rather than a seining boat because “every other year is an odd year” in relation to the salmon run. 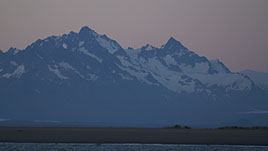 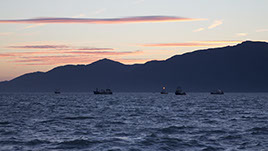