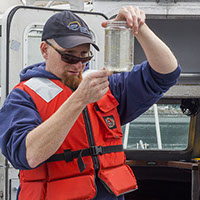 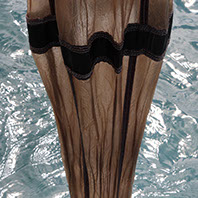 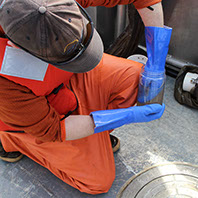 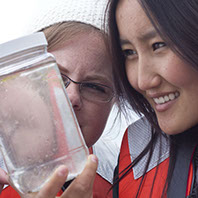 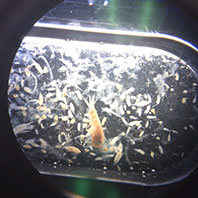 On the water behind Spike Island, a short distance from Prince William Sound Science Center, Rob Campbell leans over the stern of a boat. “RESEARCH” is emblazoned on the vessel to alert incoming and outgoing fishermen that delicate work is happening here. Campbell leans deeper, dips a net into the sound and brings up a tiny universe of plankton.

These miniscule creatures are Campbell’s specialty. As a biological oceanographer, he has built his career on studying the micro side of marine life. Zooplankton (animal plankton), as opposed to phytoplankton (the microscopic, single-celled plant plankton that serve as a food source for zooplankton), can consist of amphipods, copepods, krill, and many more. Miniature jellyfish, tiny shrimp, crab larvae, and an assortment of other pipsqueak living things permeate the sound, but one zooplankton in particular is missing from Campbell’s net: the pteropod (“tehr-uh-pod”).

According to Campbell, it is common for pteropods (“winged snails,” as he calls them) to become elusive in Prince William Sound in the summer. Zooplankton are more numerous in spring when phytoplankton blooms. In summer, numbers dwindle because zooplankton have used up much of the nutrients that phytoplankton provide.  When asked if the case of the missing pteropod could have something to do with climate change, Campbell says there is currently no conclusive research directly linking climate change and zooplankton. It takes decades of observation and monitoring to determine such links, and it will be years before scientists know what if any effects climate change is having on these mini marine animals. However, a sibling of climate change could be at play. Current research indicates that ocean acidification, another result of greenhouse gas emissions, appears to be affecting pteropods.

Large amounts of the greenhouse gas carbon dioxide (CO2) have been emitted into the atmosphere since the Industrial Revolution, primarily by the burning of fossil fuels. The sea absorbs roughly 30 percent of that CO2 , the water’s pH lowers, and ocean acidification occurs. Increasing the acidity of ocean water is potentially harmful to the zooplankton who live and work within it. Research is showing that higher water acidity makes it more difficult for pteropods to grow their shells. The acidity of the ocean’s surface is rising because there is more carbon dioxide in the atmosphere, which in turn is being absorbed by the ocean in higher quantities, and scientists have started to worry.

While Campbell is not conducting specific research on ocean acidification’s effects on plankton in Prince William Sound, scientists at the University of Washington are. Campbell himself is monitoring water temperature and salinity in the sound. “We don’t really have the kind of time series of plankton observations here [in the sound] to really be able to say one way or another how they’ve been impacted here, but we’re watching now,” Campbell says. Currently, he is in year four of a 20-year observation program. He hopes that those 20 years will reveal clearer trends.

Every time we go swimming in the sea, we are surrounded by plant and animal plankton. Some of them are just big enough to be seen with the naked eye, but many of them can only be viewed under a microscope. Pteropods and other plankton are an important source of food for many fish, especially juvenile salmon as they enter the ocean. Generations of children have grown up learning about plankton in relation to other, larger marine life. Whales are a favorite, with stories told in science class of their massive mouths scooping up thousands of pounds of zooplankton per day. That an animal so large as a whale could survive on a diet of only plankton seems ironic, but this is the importance of plankton in a nutshell. These sprightly organisms, so insignificant in size, are overwhelmingly important to supporting life in the ocean.

If plankton suffer, so do many larger marine animals. In turn, effects on those marine animals trickle into the land animals, such as bears and birds, and human industries, such as commercial fishing and seafood processing and sales, that rely on them. Entire towns, like Cordova on the coast of Prince William Sound, are built around and depend on this kind of business. Industry aside, plankton and other marine life are a part of our larger ecosystem. This blue planet is as much their home as it is ours, and research is showing that our actions are affecting them. To what extent they and we will be affected, and whether those effects will be good or bad or both, still remains to be seen. However, at the very least, it behooves us to keep an eye on them. It is scientists like Rob Campbell who are making sure to do precisely that. Plankton may be small in stature, but they are a cornerstone for many other species and inextricably linked to much larger issues affecting animal and human life alike.